Check out Amazon’s most recent design plan for their Seattle Headquarters – talk about a fresh update! NBBJ first unveiled [...]

Check out Amazon’s most recent design plan for their Seattle Headquarters – talk about a fresh update! NBBJ first unveiled their plans for the large Seattle remodel back in the Fall of 2012, but they just announced plans to add three biospheres in the middle of the 3-block downtown campus to be filled with plants from around the world. Amazon hopes to create a successful working environment that resembles a park instead of the typical “vanilla” office space.The new campus will be LEED Gold-designed to include steel and glass structures complete with employee environments, retail spaces, botanical zones featuring a range of plants – including mature trees from high-elevation climates – and a large public park in the surrounding area. 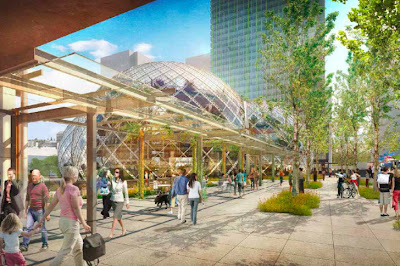 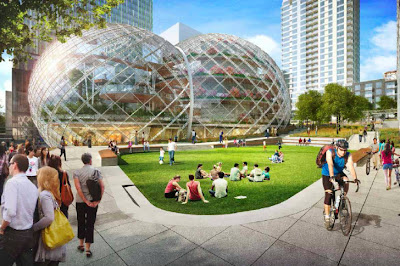 “Amazon’s new Seattle campus will revamp three blocks in the Denny Triangle area in between South Lake Union and the commercial core. The plan calls for three 37-story towers complemented with lower volumes, open space, parks, green roofs and art installations.” The largest dome will be 130 ft in diameter and the smallest around 80 ft in diameter. Inside, the spheres will house a variety of work spaces, dining areas, meeting rooms, and lounges. The LEED certified transparent domes will allow for tons of daylight and fresh air while minimizing energy use and enhancing the streetscape with reduced impact from shade and shadows.

“According to the Seattle Times, Amazon and NBBJ met with the city design review board this week to share the new plans. The plans were met with mixed reviews, although the consensus is that the biosphere plan is better than the old, rectangular design. Amazon hopes to finish the project by 2016.”

We’re definitely in to this new design plan and love that Amazon is utilizing LEED initiatives to further enhance their work space and help keep our environment green. This definitely has us eager to dream up new ways to implement some environmentally savvy designs into more of our day to day projects.